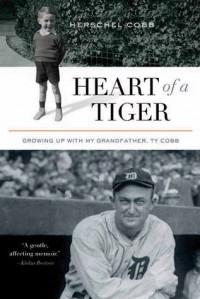 This memoir touched my heart. Yes, Herschel Cobb is probably idolizing his famous grandfather, but so what -- I idolize my beloved, late grandparents a bit, too.

Was the famously irascible Ty Cobb the old pussycat his grandson makes him out to be? Perhaps not. But for a few weeks, over the course of a few years, he was the child's life-line, as the boy suffered through physical and emotional abuse, as well as neglect from his parents. The elder Cobb was the man young Herschel needed in his life to survive, and probably saved him from turning into a violent or despairing man himself.

So the story moved me. It was horrifying to realize that a child who came from a family with means could be just as badly abused--terrorized really--as a poor child. And he needed the love and support he received from his grandfather (as well as various aunts and his grandmother) as desperately as any child.

It also makes me aware that some children never find their lifeline -- they survive by their own wits. Or the cycle doesn't break. So yes, it's the overlay of this being a "famous family," that drew me in to the memoir, but in the end, that mattered far less than the human connection told of within. Does it matter that it was a story about Ty Cobb? Not as much as it mattered that the boy, Herschel, survived.