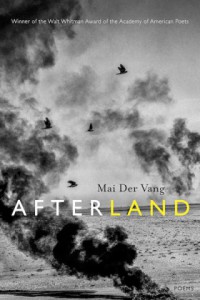 I usually don't much care if I'm one of the first to read a new release.

In fact, it's quite rare when that happens. I often go years before I "get around to" reading a book (although the release of a film adaptation can move a title forward quickly).

But a rather unusual thing happened to me in the past month: I actually read a new title BEFORE its release date. Mai Der Vang, the newest Walt Whitman Award winner, appeared in our city in March, and her publisher, Graywolf Press, sent copies of her book, "Afterland," in advance of the official release date. My colleague, Paul, loaned me his copy when he was finished with it, and I dove in with gusto.

Vang is a Hmong-American writer, and this collection speaks to the experiences of the diaspora that has occurred in the decades since the Vietnam war. The imagery is rich, the use of language creative and powerful.

But my best compliment is that the book is truly a collection, an organized, thoughtful representation of an overarching theme, rather than a compilation of individual poems. This is not surprising, because Graywolf-released poetry books generally have this kind of care in editing.

So there - early adopter. Stay tuned - another opportunity may soon be coming my way.